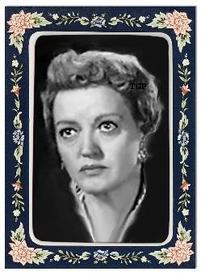 Unlike Virginia Gregg and Virginia Christine,
Vivi was a Vivian.


In keeping with the modus vivendi
of most radio Gunsmoke actors,
Vivi did a vivacious volume of appearances in radio
and a variety of television shows.
Listen to any good radio drama series,
and you will hear Vivi's vivid voice.
Every role needs to be filled with life,
and Vivi always found a way to vivify each one.
Whether it was sotto voce or mezza voce or forte that was called for,
Vivi would viva voce the words, and render them vivi voce.

Vivi Janiss not only amassed a vast radio and tv resume;
she also managed to become the second of Robert Cummings' five wives.
But never mind that brief lark,
because she finally found a lasting relationship with John Larch,
and became his wife, remaining with him until she died.

John Larch, of course, was one of those wonderful character actors
who never did less than a superb job.
He appeared in Gunsmoke seven times--six times in the half-hours,
once in the b&w hours--and had the wisdom & taste
never to appear in the colors.
Vivi herself only appeared in tv Gunsmoke once,
wisely not appearing in the episode where John Larch
buried his second wife under the columbines.

John Larch's wife in the botanical episode mentioned above, 'Fingered,'
was played by Vivi's fellow radio Gunsmoke actor, Virginia Christine.
Yet in many other tv episodes,
Vivi and John were the ones married, as in real life:

Various Vivi you can view:

It's a Great Life    'Go Home to Your Mother'
How did Vivi do in vaudeville, or at least comedy?
Very well--with vim, vigor, and verve.

Gunsmoke    'The Cover Up'
To what lengths will Vivi go for her husband?
Even vaster than you think.

Lawman    'The Visitor'
Will the gunman father be able to take Vivi's adopted son away?
Go ahead, guess.


How best to learn Vivi's vintage voice?
By listening to the Gunsmoke radio episode
'The Army Trial'  (June 25, 1955).

Look for Vivi Janiss at